Fans and family members took a moment to remember the late Michael Jackson as today marks the 8th anniversary since he passed away from an overdose of medications. It was 8 years ago today when many of us began to learn about the tragic event that none of us could have imagined, the passing of Michael Jackson.

To many of us, MJ has been an iconic figure since we were young, to some a role model, and even an inspiration to countless others. He has been part of the fabric that made up our lives, and on that day for many, it changed forever. 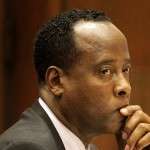 Michael Jackson died from a lethal dose of propofol which he was taking for some sleep issues while in the care of Conrad Murray, his personal doctor. Conrad eventually went to trial for his negligence, had his medical license revoked, and then was sentenced to 4 years in prison in 2011. He was released just 2 years later in October of 2013, serving only half his sentence.

Recently it has been rumored that he is now practicing medicine in Trinidad at a private medical clinic.

On July 7th, 2009, a memorial service for the King of Pop was held at the Staples Center in California where thousands showed up to pay their final respects to a man that left such a mark on society.

Today, like the many years before, his family remembers the day that MJ was taken from them and the rest of the world. There were several tweets that were posted from Jermaine, La Toya, and his only daughter, Paris Michael, that showed that he was in their thoughts and prayers.

crazy to think about how people come and go so quickly

We’ll be 4 brothers on stage joined by Michael in spirit. Through the music we made together, we find comfort in memories, esp this weekend.

Kris Jenner looks like Michael Jackson, well at least that is who some fans … END_OF_DOCUMENT_TOKEN_TO_BE_REPLACED

Michael Jackson recently showed up in New Zealand for a little performance, … END_OF_DOCUMENT_TOKEN_TO_BE_REPLACED